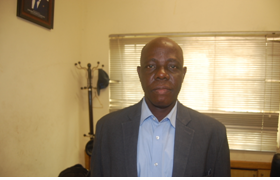 Mr. Thomas, Folorunso Olatunji was born on the 6th of December, 1967 in Lagos. He attended Ado Grammar School, Ado-Ekiti, Ekiti State from 1981-1983 and Anglican Grammar School, Otta from 1984-1985 where he obtained his General Certificate Examination. He further attended the Federal Polytechnic, Ilaro, and Ogun State from 1986 to 1988 where he obtained an Ordinary National Diploma in Electrical Engineering and proceeded to the University of Lagos where he bagged a Bachelor’s Degree in Applied Physics in 1992.

Due to his passion for the Accounting profession, he decided to pursue a career in Accounting by acquiring a professional Certificate from the Institute of Chartered Accountants of Nigeria and became an Associate member of the Institute. Subsequently, Mr Thomas was converted to the post of Assistant Chief Accountant on Salary Grade Level 13 with effect from 24th November and thereafter transferred his service from the Teaching Service to the Mainstream Civil Service with effect from 15th November, 2012 as an Accountant.

He rose through the ranks of the Accounting Profession to the post of a Deputy Director (Accounts) Salary Grade level 16 with effect from 1st January, 2019. In this capacity, he has contributed to the success story of the State Treasury Office which includes playing active roles in the following committees:

In addition, he had contributed immensely to the development and the running of Applications that have enhanced the quality of Lagos State Financial Statements produced in recent years.

Mr. Thomas Folorunso is very friendly, dedicated, diligent and hard working. He is happily married and blessed with children