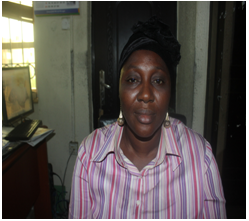 Ajala, JelilatOlawunmi is a member of the Nigerian Institute of Public Relations and Nigeria Union of Journalists.

Her responsibility includes ensuring that internal and external public understand the activities, services and policies of the Government, media relations, crisis management and content analysis of reports in the media among others.

Mrs.Ajala, JelilatOlawunmi was born on 6th August, 1971 into Laninhunfamily, at Ibadan,Oyo-State.  She started her educational career at Baptist Day School,

In expanding her educational qualification, she was admitted at University of Ilorin where she earned her B A (Hons) Islamic Studies.

She has served in various capacities and offices before her deployment as the Head, Public Affairs Unit in the State Treasury Office.

Mrs.Ajala has attended several professional seminars, workshops and trainings within and outside Nigeria, to keep her abreast of current practices.

Her hobbies are travelling, reading novels, dancing and listening to music.